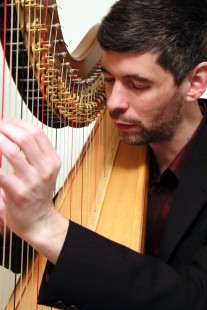 Victoria harpist Josh Layne has been called a ‘harp genius’ and a ‘consummate musician’. He is preparing for recital performances in Rio de Janeiro, but Oak Bay audiences will be served first with his May 3rd appearance at Oak Bay Matinee.

He will perform a collection of original and transcribed pieces for the harp. “I am looking for music that speaks to me, that I would enjoy playing. I sometimes find pieces (originally composed for other instruments) which I find worthwhile to transcribe for the harp”, says Josh.

One of the larger pieces on the program is the famous Handel Concerto for harp, one of the earlier works specifically composed for the harp. “A fantastic piece of music, and the cadenza (composed by harp legend Marcel Grandjany) is almost a piece in itself. It is about two and a half minutes. Great fun to play!”

Also on the program are works by Prokofiev, Bantock (with saxophonist Erik Abbink), Beethoven and Henson-Conant.

This concert takes place at Church of St. Mary the Virgin (1701 Elgin Rd, Oak Bay), which has its own parking lot, and there is ample free parking on surrounding streets.

This concert will be streamed live via our Live Webcast page.